Green Tea for the Tummy 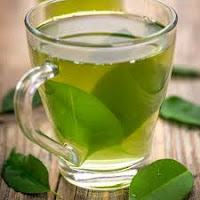 Once upon a time I used to eat Tums as a regular part of my diet - usually as an evening snack. Heartburn (GERD) was a "normal" part of my life. You see, I inherited a hiatal hernia from my father. Everyone in my family did. At least that's what I believed, since everyone in my family had GERD at some level - most worse than mine. I passed it on to my son, too. (Sorry, Steve.)

With each pregnancy (four in all), the heartburn came on just about the time the morning sickness subsided--at about the sixth month--and stayed around until the bundle of joy arrived. The rest of the time, the heartburn usually showed up after a rich or spicy meal.

That was my life...until about six or seven years ago, when I realized I hadn't had to touch my Costco sized bottle of Tums in some time.

I had been diagnosed with a fairly uncommon condition called a Gastrointestinal Stromal Tumor (GIST), a sarcoma which appeared as lesions on the wall of my small intestine. After surgery, I began to investigate what I might be able to do to avoid a recurrence. My surgeon at the time told me there was nothing I could have done differently to prevent the tumors/lesions, but I wasn't so sure. I knew enough to understand that food matters, so that's where I started.

My quest for truth started with a book called "The China Study," which implicated meat as the cause of cancer. In response, I faithfully became a vegan. That lasted about six months. The vegan experiment left me tired and foggy. My skin and hair had lost its luster, and my heavy soymilk consumption gave me an embarrassing uncontrollable flatulance problem. On top of all that, I was gaining weight. You can eat a lot of really bad food as a vegan.

Not long after, I ran across a book called, "Why We Get Fat, And What To Do About It," by Gary Taubes, which caught my attention because I was getting fat I and wanted to know what to do about it. I already guessed he was going to talk about carbs, because my dear old dad had already experimented with the Atkins Diet with quite good success. That book kick-started my one-eighty flip from vegan to paleo, a dietary "lifestyle" I adopted for a year or two. His more comprehensive tome, "Good Calories, Bad Calories," explained a lot about what happens on the cellular level when we eat food. From there, I picked up every book I could find on carbs, fats, grains, and the role of nutrition in health. And with every book I read, I began to make changes to my diet. By the way, in the course of my reading other materials, it was brought my attention that the conclusions made in The China Study have since been debunked. This shouldn't surprise anyone since mankind has been eating meat cancer-free since the beginning of mankind...well, at least since the Flood.

Anyway, it was during that transition that I realized I was no longer suffering from GERD. At all. Did I still have the hiatal hernia? Hard to say, since I haven't actually had any scopes done since that life-changing surgery. But I'm guessing it's probably still there, because the heartburn comes back to haunt me from time to time.

The smart thing to do would be to stick with a low-carb, grain-free, sugar-free diet. It's the smart thing because it's the healthy thing. The heartburn is my body telling me to knock it off with the bad food.

So all of that brings me to the point of this post: and that is to provide two natural alternatives to the many over-the-counter "solutions" to heartburn. These two things have helped me lay down and sleep at night rather than spend the first two to four hours of the night propped up on pillows.


1. Apple Cider Vinegar -- There is a popular theory going around that indigestion (GERD, heartburn, etc.) is not the result of too much stomach acid, but too little. And frankly, it makes a lot of sense because oftentimes heartburn is accompanied by a feeling of fullness--food sitting on the stomach hours after a meal. A teaspoon to a tablespoon of apple cider vinegar in a glass of water provides the stomach with extra acid for digesting food that just won't move on. This works for me most of the time. Amazingly, once it hits my stomach, the burning sensation caused by the GERD stops almost immediately and I'm able to lie down within fifteen minutes to a half hour.

2. Green Tea -- I discovered this while on a cruise some years ago. I'm not sure what the science is with green tea, but if I brew a cup or two in the evening after a meal of all the wrong things, it does a very good job settling my indigestion and allowing me to sleep without worrying about my dinner coming back to haunt me after I lie down.

There are times that I actually practice what I preach about eating a clean healthy diet free of all those toxins that plague long-term health, but I'll probably never be able to stick to it strictly because...well, I'm human.

If you are considering proton pump inhibitors, avoid them if you can. They have more harmful affects on your digestion than your doctor will ever tell you when he prescribes them to you.

My mantra is to try the natural remedies first. Pharmaceuticals may indeed be required at some point, but they should never be the first course of action because of the risk of harmful side effects.

Posted by Cathy Finnesgard at 11:39 PM No comments: