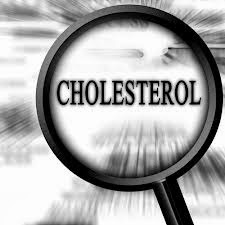 I never thought twice about my cholesterol levels as a younger person. Coming from a hearty family (no pun intended) where everyone lived into their 80s and heart disease was a non-issue, it just wasn't a concern. Perhaps the fact that I wasn't the sort to go to the doctor every year for an "annual physical" had something to do with it. (Why spend money on a doctor visit if you're not sick?) Health insurance was a luxury when I was raising four children on a very small income.

So it wasn't until somewhere in my early 50s that I even became aware of my "cholesterol count." The doctor told me my cholesterol was "borderline-high" but if I watched my diet, it shouldn't be an issue. Back then I actually trusted the information I was hearing about eating too much fat-- even to the point of rationalizing that eating candy corn and jelly beans was much better than eating M&Ms or peanut butter cups because, well...they don't have any fat! I switched from whole milk to 2%, then before I knew it I was drinking 1%-- and actually liking it!--even though it looked more like water than milk. (Crazy, I know.)

Fast forward to the present day where I am putting half & half on my granola, cream in my coffee, and cooking everything in butter.

What's my cholesterol now? Who cares?!

What we are being told about cholesterol is less about science and more like a sort of religion that relies on ones beliefs rather than on actual evidence. After doing some personal research, I have discovered the high-cholesterol-causes-heart-disease mantra has no basis in fact.

That's right. It is a hypothesis, but it is not a fact.

In his book, The Cholesterol Myths, Dr. Uffe Ravnskov has this to say:

What does he mean by that?


"[I]f a scientific hypothesis is sound, it must agree with all observations. A hypothesis is not like a sports event, where the team with the greatest number of points wins the game. Even one observation that does not support a hypothesis is enough to disprove it." (emphasis mine)

The diet-heart hypothesis--that is, the idea that dietary cholesterol and/or too much saturated fat causes heart disease--has been the subject of study since the 1950s. That's about sixty years. In the space of sixty years, they have yet to show conclusively that either saturated fat OR cholesterol have any impact whatsoever on heart disease. For instance,
So, in other words, high cholesterol is a risk factor unless you're a woman, a Russian or Canadian man, or a man who's already had a heart attack or who is less than 48 years of age.

That's a lot of "exceptions to the rule," and these are just a few of them. If this were a game or government legislation, exceptions might be okay. But when we're talking about causation, exceptions must have reliable and reasonable explanations. Cholesterol risk exceptions seem to be arbitrary and more or less unexplainable--to the point of being silly.

Good scientific method would dismiss a hypothesis with this many exceptions as false and move on to look at other possible causes. But once you decide something is true the only thing left to do is try to prove it...and the efforts to do so continue year after year while alternate hypotheses that make a whole lot more sense are completely dismissed.

Here are some things you may not know about cholesterol...

Cholesterol is essential for life. We need it to maintain brain health (connections between nerve cells are made up almost entirely of cholesterol). Our body makes vitamin D from cholesterol and sunlight. Cholesterol provides structural integrity for our cell membranes. It is a building block for most sex hormones. And it is an important component of the bile that helps digest our food.

It's time to ask the question:  Why do these research scientists seem to want cholesterol to be the bad guy?


Answer:  Because cholesterol can be controlled by drugs. More to the point, it can ONLY be controlled by drugs. There is a huge and growing market for statin drugs. In some parts of the world you can buy them over the counter. Keeping in mind that much, if not all, of the research currently being done on cholesterol is being done by the companies that manufacture statin drugs, would it surprise you to know that the guidelines for a "healthy" cholesterol (LDL) level are considerably lower today than they were 20 years ago? My "borderline-high" cholesterol reading would have been considered quite healthy and normal not too many years ago. But in order to sell a drug, there must be a need for it... or at least a perceived need.

Another thing to keep in mind is that doctors get their information about chronic disease from researchers. This has always been the case. The reason you see very little in the way of opposition to entrenched health dogma is that very little research is actually independent of the diabolical duo: pharmaceutical companies and government. Doctor may be sincere in their beliefs about the cause of heart disease, but they can be sincerely wrong. They may prescribe a statin drug like Lipitor or Crestor to control your cholesterol, but if you're wise, you will do some research of your own before you start down that path.

Like every drug, statins come with a host of side effects that wreak havoc on the body. If your body knows what its cholesterol level should be (self-regulating), and there is no reasonable evidence linking cholesterol with heart disease, then why would you want to deprive your body of what it needs and at the same time cause additional stress and damage to it?

Heart disease continues to be the number one killer among chronic diseases, so it would be nice if research could pin down what's causing it. But don't count on that happening. The goal isn't to cure heart disease, after all. The goal is to treat it. Usually with drugs. And if they can convince us that cholesterol is causing heart disease, then they can convince us that a cholesterol-blocking drug will solve our problem.

On the other hand, there are some very real risk factors to heart disease that you should consider--among them...

One last note... there is no causation link between saturated fat or cholesterol and heart disease, but that doesn't mean there is no link between DIET and heart disease. Over-consumption of foods high in trans-fats and polyunsaturated fats have been linked to cancer. There is also evidence to suggest that plaques that build up on artery walls and eventually block blood flow are a response to injury-- injury caused by oxidative damage. Oxidative damage is directly connected to consumption of damaged fatty acids, such as rancid oils and trans fats.

What we eat makes a difference! But cholesterol is not one of the bad guys. I've had my last cholesterol "checkup" and made my peace with it. I may yet die of heart disease, but it won't be from cholesterol. Heart disease is the classic disease of old age, even for the relatively healthy...and there's nothing I can do about that!


All the information for this article was pulled from the following two works, but there are more books out there on the topic, and hundreds of health professionals (if not more) who have come to the same conclusion. Grabbing at least one and reading it for yourself...
The Cholesterol Myths, Uffe Ravnskov, MD, PhD
The Great Cholesterol Con, Dr. Malcolm Kendrick


Posted by Cathy Finnesgard at 1:12 PM No comments: Links to this post